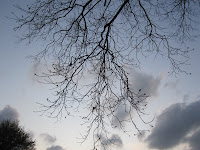 Another rainy, dreary winter day.  I've been listening to Enya's Christmas album called And Winter Came.  Every one of the twelve songs on this album is priceless.  Some have Enya's familiar other-worldly beauty, but others - like "One Toy Soldier" and "My! My! Time Flies!" are a little more traditional than Enya's usual fare.  "One Toy Soldier" has an engaging tune and a steady martial beat - good music for getting things done.


There are five more Christmas cards on my desk to be answered.  I didn't send Christmas cards this year.  What can I say?  It was a "fly by the seat of your pants" Christmas, and there just wasn't time for the usual card sending.  But we did receive a few cards that I want to acknowledge, so I'm answering one a day.


I took the Christmas wreaths off the front and side doors today.  Why did I do this in light of the fact that I've decided to keep all the indoor Christmas decorations until Valentine's Day?    Is it that I don't want to advertise my Christmas eccentricity to the world?  Maybe I did it out of kindness to those who say they don't like Christmas and are always glad when it's over.  Anyway - the wreaths are packed and ready to go in the attic until next Christmas.


Tuesday is house cleaning day around here.  I just finished mopping the kitchen and living room floors.  I hate mopping - and not because it makes my back ache.  I hate it because no matter how meticulous you are about sweeping and/or vacuuming, when you begin to mop you'll encounter little bits of debris that you missed.  There are tiny unidentifiable bits of "stuff" in addition to the occasional piece of hay that made its way in from the barn.  There is always a little more vacuuming to do after the floor dries.


We couldn't watch the opening episode of the third season of Downton Abbey on Sunday night, so we recorded it and watched it last night.  It felt like a visit with long lost relatives.  I got attached to all these Downton characters during the last two seasons.  At one point in this opening episode, Robert Crawley (Lord Grantham) said he felt like a wild animal whose habitat is being encroached upon.  I know what he means.  Sometimes the culture that surrounds you changes so fast that it's impossible to change along with it.   We give in to the new cultural changes when we must or when we honestly think they are changes for the better.  But who can happily give in to changes that do violence to what you hold dear?  As some wise person once said, "I can only go so far on the fashion train."
Posted by Judith B. Landry at 3:40 PM