The Statue of Liberty & Emma Lazarus 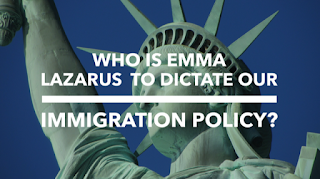 How much do you know about the Statue of Liberty and Emma Lazarus, the author of the famous lines, "Give me your tired, your poor, your huddled masses"?  These lines are from her sonnet, "The New Colossus" which is on a plaque attached to the base of the Statue of Liberty.

The Statue of Liberty was a gift from the French people to the United States.  The torch-bearing arm of the statue was on display at the Philadelphia Centennial Exposition in 1876.  This display launched fund raising efforts to finance a base for the statue to stand on.

Famous authors of the day, including Emma Lazarus, were asked to write something to be auctioned off to raise money for the base for the Statue of Liberty.  In response to this appeal, Emma Lazarus wrote this poem:


The New Colossus
Not like the brazen giant of Greek fame,
With conquering limbs astride from land to land;
Here at our sea-washed, sunset gates shall stand
A mighty woman with a torch, whose flame
Is the imprisoned lightning, and her name
Mother of Exiles.  From her beacon hand
Glows world-wide welcome; her mild eyes command
The air-bridged harbor that twin cities frame.
"Keep, ancient land, your storied pomp!" cries she
With silent lips.  "Give me your tired, your poor,
Your huddled masses yearning to breathe free,
The wretched refuse of your teeming shore.
Send these, the homeless, tempest-tossed to me.
I lift my lamp beside the golden door!"
In 1885 the completed Statue of Liberty - the work of French sculptor, Frederic Auguste Bartholdi - arrived in New York Harbor, transported by ship in 214 crates.  The statue was mounted on the impressive base provided by the successful fund raising efforts, and was dedicated in 1886.
Emma Lazarus was born in New York City in 1849 to a non-practicing, non-religious Jewish family.  She became a successful poet, writer, and translator.  She was an adherent to Georgism, a form of communism promoted by economist Henry George (1839-1897).  Some modern feminists believe she was a Lesbian.
A careful reading of Lazarus' poem explains why she is revered by many feminists.  She contrasts the original male Greek Colossus of Rhodes, erected in 280 B.C., with her new female Colossus, the Statue of Liberty.  She describes the original male Colossus as "brazen" and "conquering" while the new female Colossus is benign, maternal, and welcoming.  I doubt that she was grieved by the fact that the original male Colossus of Rhodes was destroyed in an earthquake in 226 B.C.
Emma Lazarus died in 1887, a year after the dedication of the Statue of Liberty.  Many years later, in 1903, a plaque engraved with "The New Colossus" was attached to the base of the Statue of Liberty.  Even after doing quite a bit of research, I have not been able to discover who gave permission for this plaque to be installed.
Since 1903, "The New Colossus" has been widely quoted and is held in such esteem by some that it rivals the Constitution.  To some it has assumed the authority of holy scripture.  It is often quoted by those who promote open borders and unlimited immigration.  It is even used in an attempt to defend illegal immigration.
Although "The New Colossus" may have great literary value, it is nothing more than a poem among other writings by other authors to be auctioned off to raise money for the base of the Statue of Liberty.  Why this poem, written by a communist as a later addition to the Statue of Liberty, should dictate our immigration policy is beyond understanding.
﻿