Don't get me wrong.  I am not complaining.  We've had so many drought spells over the last few years, I'd be ashamed to complain.  At times we've seen the pasture so dry that the ground was cracking.  We would sit in the barn aisle and watch the horses paw the earth, making big clouds of dust.  We've run sprinklers in the pasture in an attempt to preserve some grass for the critters and paid big water bills as a result.
So - you won't hear me complaining about rain - and we've been having it almost every day for a while now.  But I am amazed at how short my memory is.  I had forgotten that when you get a lot of rain, all the vegetation that you want to grow certainly does improve; but the weeds suck up the rain and grow twice as fast as the good stuff grows.
Even if you like weed eating, mowing, etc., some days it's impossible to do because it won't stop raining.  When there is a little break in the rain, it's too wet and squishy to do anything.
And then there's mud.  I really had forgotten about mud - it's been so long since we've had long rainy spells.  I'm getting a refresher course now.  The ground around the horses watering trough is a mass of ooey, gooey, sticky, icky mud.
The flower pots on the deck already looked bad from the previous drought conditions.  (I've already told you - I'm not a gardener.)  Now they're really a sight to see.  Just when the portulaca, miniature rose, Blue Daze, and the herbs were beginning to look a little better because they're getting some water - big healthy weedy vines have sprung up in the ground around the deck.  They're sending their evil tendrils up on the deck to attack what's in the pots - and what's in the pots is no match for them!
I usually just walk across the deck on my way to the barn.  I don't pay much attention to the plants.  They probably think they're invisible.  But yesterday even I couldn't ignore a poor Blue Daze under attack from one of the vines.  Tendrils were wrapped around and around it's poor branches.  Baby vines had sprung up in the pot with the Blue Daze.  You don't have these evil super-weeds in a drought.  But of course, in a drought, the favored plants barely survive for lack of a gardner - but that's another story.
Two or three days of sun would be nice.  It would give us a chance to dry out and beat the jungle vegetation back.  But I'm definitely not complaining.
Posted by Judith B. Landry at 6:29 PM 2 comments:

﻿
﻿
We decided to do some rambling today, so we took care of the barn chores early this morning. We packed our camera equipment and set out for Breaux Bridge.

On the way we stopped at the Iberville Visitors Center, located near I-10 in Gross Tete.  It opened a little over a year ago, and today was our first visit.  We drank complimentary coffee and chatted with the two friendly ladies who work there.  The inside is as beautiful as the outside.   Cypress floors, doors, and paneling make it a reflection of the nearby Atchafalaya Swamp.
﻿﻿
﻿We traveled on to Breaux Bridge and decided to make the short trip out to Lake Martin.  We drove along the gravel road that runs along the swampy edge of the lake.  I was hoping to see an alligator, so we stopped when we came to a break in the foliage where we had a good view of the swamp.

I saw bubbles in the water and remembered that Willie, on Swamp People, is always talking about where you see bubbles, there is usually an alligator.  But I'll swear, I couldn't see anything but a couple of old knarly pieces of wood in the water.  Just as I was complaining that we weren't going to see any gators, I realized that the knarly pieces of wood were two alligators - one of them looking me in the eye from just a few feet away.  He was nice enough to sit still so I could get his picture.
We went farther down the road and discovered that there is a new Lake Martin Visitors Center, complete with a picnic pavilion and state of the art rest rooms.  Now if you've ever been to Lake Martin, you will appreciate what a great thing this is!  We used to have to drive back into Breaux Bridge to find a public rest room which meant we couldn't stay out at the lake for hours on end.  Now we will be able to pack a picnic lunch and spend the day at the lake, watching the wildlife and taking pictures.  I think we'll wait for cooler weather though.

We walked the quarter mile boardwalk through the swamp, but didn't see anything as exciting as our two gator friends up the road.
We had some good Cajun food for lunch at Poche's, a Breaux Bridge meat market and restaurant which was recently featured in Garden & Gun magazine.  After lunch we did some looking around in one of the antique shops in the historic district of Breaux Bridge.  I like to check these places out for old post cards, stationery, and desk paraphernalia.  But I didn't have any luck today.

When we took the Gross Tete exit to head home, we decided to make one last stop at a new gift shop called The Swamp Shop, right across the road from the Iberville Visitors Center.  In fact, the ladies at the Visitors Center had told us about this new gift shop when we made our first stop there this morning.

Jean Crites, the proprietor of The Swamp Shop is very friendly and welcoming.  And her shop is something to see!  Since it's in a house, I assumed the owners probably lived there and had a one room gift shop.  But no, the shop takes up the entire house.  All the merchandise has a Louisiana theme.  Each room is artfully arranged and decorated, and it's a pleasure to stroll around and look.  I stocked up on post cards to send to my pen pals.  Jerry found two books he wanted, and I couldn't resist a beautiful glass fleur de lis necklace.  I'm already thinking that this might be a good place to do some Christmas shopping.
Posted by Judith B. Landry at 6:33 PM 1 comment: 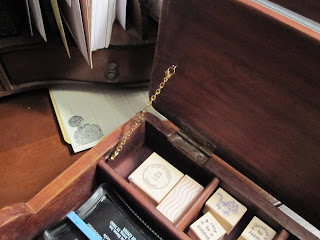 It's always fun to make a good thing better.  That's what we've done with the English campaign desk that I reviewed in an earlier post.  Jerry installed the eye screws and chain, shown in the photo at left, with a little bit of help from me.  It was his idea to use jewelry chain with a clasp on each end so the chain can be easily removed if there's ever a reason to do so.  The chain keeps the stationery holder section of the box upright so that it doesn't flop down and spill all your stationery.  When the stationery holder section is closed the chain drops into the little compartment as shown in the photo below. 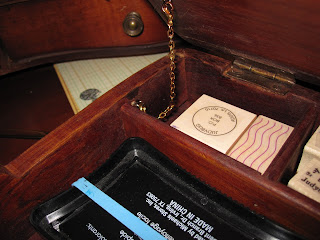 I also added some green blotter paper to the sloped writing section.  I attached it with removeable double-faced tape. The blotter paper protects the wood and makes a slightly padded writing surface. 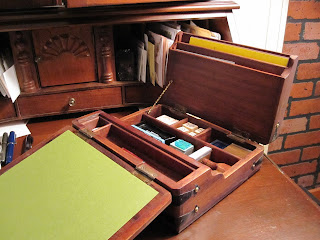 In the photo below you'll notice that I've placed a blue coaster under the hinged clasp to keep it from marring the surface of whatever table or desk the campaign desk is sitting on when I'm writing.  This blue coaster was all I could find around the house to serve this purpose, but I'm on the lookout for something that will look better with the green blotter. 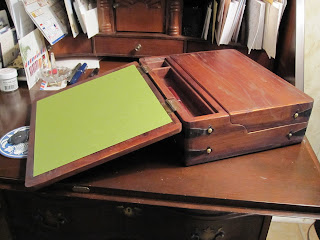 I've already written quite a few letters and post cards on this campaign desk.  Thank goodness I'm actually using it.  I don't need any more what-nots!﻿
Posted by Judith B. Landry at 5:09 PM No comments: