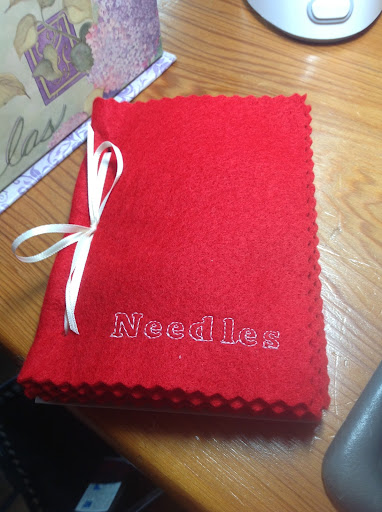 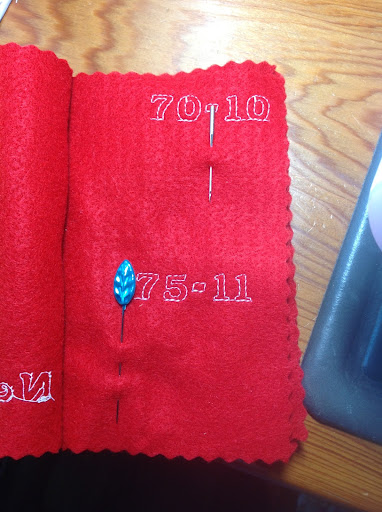 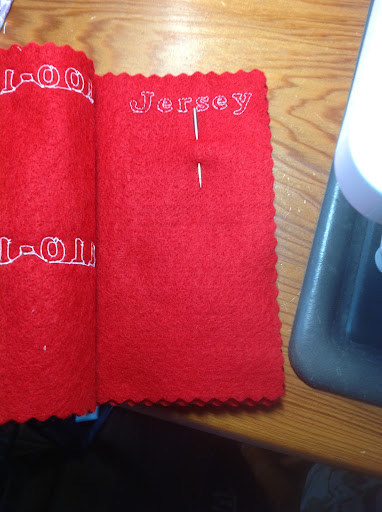 To make my little book, I cut four pieces of felt with pinking sheers - each one approximately 6 x 8 inches.  I folded each of these in half, making them 4 x 6 inches.  I punched three holes along the folded sides.  A regular paper punch won't work.  I used a hole punch and hammer from my MakingMemories Tool Kit.  I love it when paper crafting and sewing can use some of the same tools.  I cut a 4 x 6 inch piece of chip board, punched matching holes in it, and placed it on the bottom - under the pages - for some stability.  I bound the felt pages and chip board together with ribbon.  I used an alphabet font on my machine to do the lettering.  So there you have it!  Organized needles!
Posted by Judith B. Landry at 6:52 PM No comments:

Blogging on the Go

Here I am with my iPad on my lap, making a blog post - thanks to a recently purchased iPad app called BlogTouch.  Before BlogTouch, I had to be at my computer to make a blog post; and I'm not parked in front of the computer much since the iPad entered my world.   But with BlogTouch I don't have to be anywhere near my computer.  I can blog in the car - not while driving, of course.  I can blog while waiting on the Dow train between here and Baton Rouge.  I can blog at the doctor's office, the beauty shop, or while waiting in line at the store.   The result of having BlogTouch should be more frequent blog posts.  Time will tell.  We'll see.

Although I have an external keyboard that I can hook up to my iPad, it's a little cumbersome when you're on the go.  It has taken a lot of practice, but I'm fairly proficient at typing on the on-screen keyboard.  It was maddening at first!  A slick screen is nothing like a real keyboard.  I had never thought about how much "feel" has to do with typing.  Since there's nothing to feel on the screen, I have to look at the keys as I type.  At first I thought that on-screen typing would ruin me on a real keyboard, but it hasn't.  My brain seems to have accepted that these are two different skills.

As much as I love technology, it has occurred to me that it has a tendency to multiply and devalue things.  Think about it.  In the early days of photography, photographs were rare and highly prized.  A lot of people probably didn't have more than a half dozen pictures taken of themselves in a lifetime, so descendants often fought over photographs long after great-grandpa was gone.  Fast forward to modern digital photography.  Photographs have multiplied like rabbits!  We take hundreds - maybe thousands of them in a year's time.  I'm trying hard not to think of them as a nuisance.  They take up space on all my gadgets.  They have to be constantly sorted and organized if they're ever to be of any use.  And who needs 345 pictures of the cat, chasing a ball even if it was cute to see at the time?  You see what I mean?  Pictures just aren't as valuable as they were when they were rare.

And I fear that the same thing is true of the written word.  Once upon a time books and written documents - where people babbled on about experiences or opinions - were rare and highly prized.  Now modern technology and the internet have multiplied the written word to astronomical proportions.  Anybody can write anything and publish it instantaneously.  So . . . will the world be a better place because the BlogTouch app makes it easy for me to make frequent blog posts?  Nah, not really.  But all bloggers love to drone on, and if the readers get bored, a mere click will take them somewhere else.  Or, better still, they can set up their own blog.

(The cute red car above is courtesy of www.carclipart.com)

Posted by Judith B. Landry at 6:00 PM No comments: