Rocky's Journal - Springtime in the Barn

There's nothing like a cool, misty spring morning in the barn - especially when Judy (the groom) comes in and gives you the spa treatment.  We got a thorough brushing, and a lot of our old winter hair rolled off.  There was a great big pile of hair from Tesoro, the boss hoss, and smaller piles from me and Fay.  It's not hard to tell who the hairy beast is around here.

﻿ These pictures were taken right after our grooming.  As much as I hate to admit it, Tesoro's picture doesn't do him justice.  He's really better looking than this.  The problem is that he hates the camera so it's hard to get a good picture of him.  I guess maybe the paparazzi followed him around in his youth - although I can't imagine why.  Fay is her cute, red-headed self.  And there's me - the sorrel with the flaxen mane.  I may be at the bottom of the pecking order, but I think it's easy to see who got the looks in this herd.

Judy always lets us eat hay out of the aisle rack while she brushes us.  When she turned us out in the pasture this morning, we were expecting hay to be in the outside racks.  After all, Jerry (hay and feed manager) always has hay out there for us when he turns us out on the days we don't get a grooming.  But today the darn hay racks were empty!

We hung around the door to the hay stall, thinking surely some hay was going to make its way out to the racks.  But no.  Judy came out with a shovel and push broom and started cleaning the dirt and debris (nice word for poop) off the concrete wash pad.

The three of us gathered 'round and watched.  My head followed the broom, back and forth, while I listened to Judy talk about how we had been eating hay in the barn all morning, and we weren't going to get any more until after lunch.  She suggested that we do what horses do - graze.  She pointed out that hay counts money while grass is free.  Hmm.  I didn't know that.

After a while, Tesoro laid himself down on the ground and pouted.  Fay stood with her head down, ears back, and that disgusted look she gets on her face.  Me?  I'm a pragmatist.  I ambled off to munch on green grass.  Let 'em pout.  All the more grass for me!

Dr. Chapman, the vet, and her two assistants came today to give us our yearly shots.  I don't like shots, but I handle getting a shot better than I used to.  Sometimes you just have to make up your mind to be a grown-up.

They did the usual prodding and poking that goes with a medical exam.   Of course, being poked by three pretty girls is not bad - better than being poked by some burly old men.

The good news was that we didn't have to have our teeth floated this year.  That's when your teeth have grown kind of pointy, and they have to file them down.  Boy! Do I hate all that!   They usually have to give me and Fay a tranquilizer when they float our teeth.  I don't much like the tranquilizer either.  It makes me feel drunk for an hour or so.  Tesoro shows off sometimes by letting them do his teeth without a tranquilizer.

Well, this keeping a journal is all well and good, but I've got grazing to do.

In Donaldsonville with the Camera Club

Jerry and I got up early this morning so we could meet the other members of the Westside Camera Club to set off on the field trip to Donaldsonville that we planned at the last meeting. 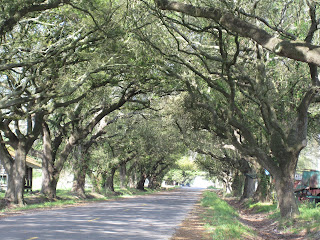 We met four other camera club members at 9:00. Our first stop was Palo Alto Plantation on the outskirts of Donaldsonville. There's no large mansion like Nottaway or Houmas House here, but there's an oak-lined road that deserves something spectacular at the end of it. The beautiful old oaks arch and meet over the road.  The main house is a pleasant looking home; but since it's a private residence, we didn't wander around the grounds, being content to take a few pictures from the main road. 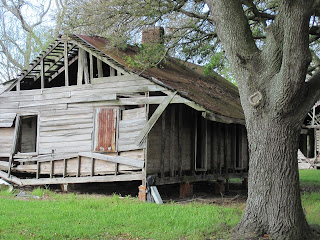 Along the oak-lined avenue, which turns off the main road, there are the ruined remains of cabins and farm equipment on either side. It's a quiet place. We were there for about an hour with not more than a half dozen cars passing on the road. As I snapped photos of the cabins, I wouldn't have been surprised to see a ghost or two. If only these ruins could talk . . . 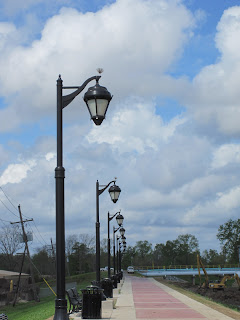 Next we headed to the old part of Donaldsonville, but our first stop was the new park along the river. There's a brick sidewalk, park benches, and old fashioned street lights atop the levee - the prime location for watching the river traffic go by. 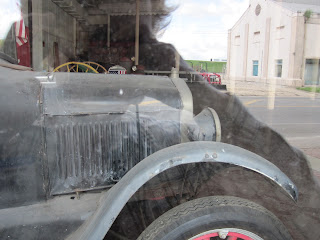 The Donaldsonville Museum in the old business district was closed, and that was unfortunate because there are lots of cool vintage items in the display windows. The more experienced photographers in our group got some good photos through the windows.  I'm not so good at through-the-glass photography so you can see my shadow in this photo as well as the reflection of the building behind me. 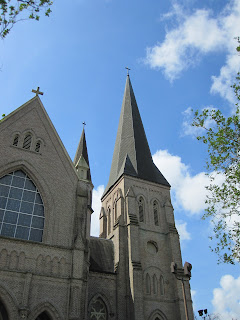 We drove down the street to Ascension Catholic Church, built in 1876, where we got lots of good exterior photos. Judging from the cars in the parking lot, a service was going on inside. Interior photos will have to wait for some future outing. 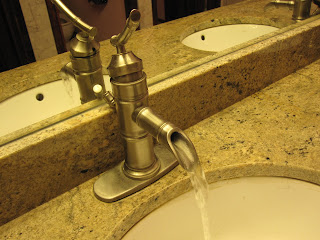 We ate lunch at a restaurant and bar on Railroad Avenue called The Capitol. The food was good, and the atmosphere made me think of the early twentieth century.  The Capitol could have been an upscale speakeasy during Prohibition if it's location was more out-of-the-way. I imagine it got its name from the fact that Donaldsonville used to be the state capital.   I guess I was too busy eating to think about taking pictures in the restaurant, but the unusual faucet in the elegant ladies' room deserves at least one photo.
Posted by Judith B. Landry at 7:57 PM 1 comment: 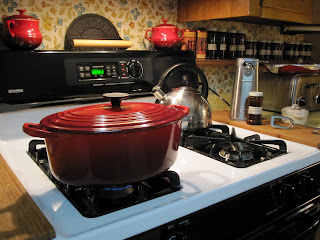 Jerry says it rained last night.  I slept through it and woke up to a gray, cloudy day.

I spent yesterday afternoon scrubbing the stovetop.  A sparkling clean stovetop is a wonderful thing.   The down side is that I'm reluctant to cook and mess it up.  But a clean stovetop does nothing to relieve hunger pains, so chicken is simmering in the red pot.

The final dish will be chicken and dumplings - a new recipe I'm trying.  My grandmother's chicken and dumplings were wonderful.  I remember watching her roll out the dough to make strip dumplings in her cozy West Virginia kitchen.  I wish I had her recipe, but I don't.  The recipe I'm using calls for canned biscuits that are rolled thin and cut in strips.  I hope they will be at least almost as good as Mema's.  We'll see. 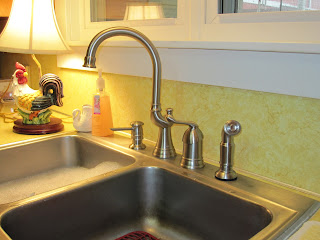 I have a new kitchen faucet, installed by my handy husband.  It's a beautiful thing, and I'm sort of glad the old one wore out - although the price tag on new faucets is staggering.  (It's been a while since we bought a kitchen faucet.)  The brushed stainless finish on the new faucet doesn't seem to show water spots.  And I was really pleased to find that I have much better control over the water flow than I did with the old faucet.

I just discovered the online magazine, The New Noblewoman at www.newnoblewoman.com.  The editor, Amanda Millay, offers lots of interesting articles that instruct and inspire on various subjects from how to get out of a car gracefully to how to brew the perfect cup of tea.  There's a recommended book section.  There are tips about beauty, fashion, and home decorating - all traditional and classic.  It's the Jane Austen lifestyle brought up to date.  I've frequented The Art of Manliness online magazine at www.artofmanliness.com  for quite a while and have often wished there was a female counterpart.  Thanks to Amanda Millay, there is! 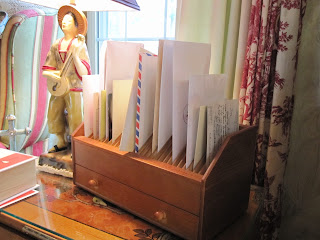 My letter rack is full of letters and post cards that need to be answered, and a chilly gray day is the perfect time.  But right now I'm off to check on the chicken and try my hand at dumplings.
Posted by Judith B. Landry at 11:40 AM 4 comments: