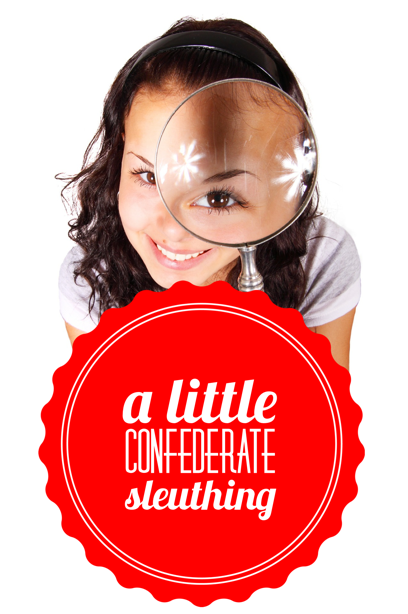 I'm working on photographing and cataloging Confederate monuments in our area.  There used to be a monument in the middle of North Blvd. in Baton Rouge.  Several years ago, the city decided to create a park there, and the monument was removed with the understanding that it would be re-installed in due time on the grounds of the Old State Capitol Museum, but it has never reappeared.

I called the Old State Capitol this morning.   I told the person who answered about my project and asked the whereabouts of the Confederate monument.  She seemed flustered.  She couldn't answer me.  She put me on hold.  When she came back a few minutes later, she said I would have to talk to someone at the Secretary of State's office.  She gave me the name and number of a particular person there.

I called this person and put the same question to her.  She was pleasant enough and told me that the "soldier portion" (not the base) of the monument is part of the Sarah Morgan Dawson exhibit at the Old State Capitol.  "Because," she said, "Sarah Dawson wrote about Confederate soldiers in her diary."  I told her that I have read Sarah's diary, and she did indeed write about Confederate soldiers (Yankee ones, too, but I didn't mention that).

I said that I wondered why the Old State Capitol didn't tell me the monument was there when I had called them earlier.  She said that since monuments are such a sensitive subject right now, they probably prefer to steer any discussion of them to the Secretay of State.

She went on to tell me that the "soldier portion" on display is the property of the City of Baton Rouge.  It is classified as an "artifact on loan."  She made a thinly veiled reference to the fact that the current city administration is difficult to deal with.  I had the impression that this person may be sympathetic to our pro-monument cause, but of course, can't say so.  I think she was letting me know that the hostile city administration does still own our soldier.

About a half hour after ending this conversation, I was kicking myself for not asking the whereabouts of the monument base, so I called back and got to speak to the same person.  She has no idea where the base is, but the City may know.   I asked if there are any documents that record what was engraved on the base.  She said she doesn't know, but if there are any, they would probably be held by the City.

I don't think I'll pursue any detective work on the monument with City Hall.  No good can come from bringing a Confederate monument to the attention of a corrupt and hostile city government - not now, anyway.

There are some excellent photos of the original 1886 monument.  In the 1950s the monument was placed on a new base, and there are photos of that as well at this link   http://historicalbatonrouge.blogspot.com/2008/09/east-west-baton-rouge-civil-war.html

I plan to visit the Old State Capitol soon and will take some photos of the "soldier portion" where it is now.

Posted by Judith B. Landry at 2:07 PM No comments: