I'll be having right knee replacement surgery this week.  I had my left knee done last year with very satisfactory results.  But, I must say, I'm glad I'm not a centipede!  I've been reminiscing about my last surgery by reading this old post: Me, My Knee, and Feline Therapy.

As soon as I'm able, I'll post the conclusion to "The Secret Life of a Fountain Pen Aficionado."  I thought I'd get it posted before surgery, but I've had entirely too much to do to get ready for this little hospital visit.  Anyway - I'll be back soon.
Posted by Judith B. Landry at 7:08 PM 1 comment:

The Secret Life of a Fountain Pen Aficionado - Part Two 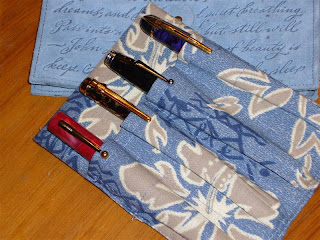 The pen of preference for me and my college friends was Sheaffer's inexpensive cartridge fountain pen.  This was a capped pen - not a desk pen - and it went everywhere with me.  Cartridge pens were a new innovation, popular for their convenience.  But note-taking students could go through a box of cartridges in a short period of time, and this could be a drain on the purse.

A fellow classmate introduced me to the practice of refilling cartridges with a needle and syringe.  A fairly inexpensive bottle of Sheaffer ink would refill countless cartridges.  After four or five refills, a cartridge had to be discarded because the opening that fit on the pen nib would become enlarged which could mean a leaky pen.  Even so, this method stretched our cartridge allowance.  Of course, we could have alleviated our ink budget problems considerably by using cheap ball point pens.  But, as fountain pen devotees, we couldn't bring ourselves do descend to the level of an uninspired ball point.

Lots of things have improved over the years, but it seems to me that the quality of common, everyday paper declined during the 1950s and 60s.  No longer could you use your fountain pen on a lot of dime store tablets without having the ink feather or bleed.  "Feathering" is when the ink travels to places it shouldn't go, producing a broad, blurry line instead of a fine, distinct one.  "Bleeding" is when the ink goes through to the other side of the paper.

Due to this decline in the quality of ordinary paper, fountain pen lovers had to choose to either retire their fountain pens or go to specialty shops to buy better, more expensive paper.  Those who could afford it, sprung for the expensive paper for letters of importance; but they still had to resort to the common ball point for such mundane tasks as making out the grocery list.

The Secret Life of a Fountain Pen Aficionado - Part One 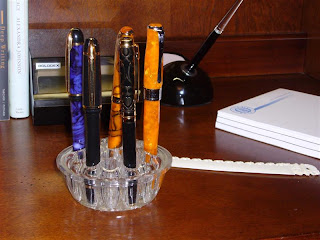 Few of my friends and acquaintances know about my penchant for fountain pens.  I don't bore them with the knowledge since most people today have no interest in fountain pens.  Young people don't know what they are.  But my memories of fountain pens go way back.

According to the dictionary, "a man of letters" is one who is devoted to literary  activities.  By this definition, my mother was definitely "a woman of letters."  She was an avid reader and always preferred big, thick novels about families and old houses.  She had a beautiful handwriting and was a gifted writer.  She kept a journal all of her life until a stroke took away her ability to write.  She persisted for a while after the stroke, but eventually stopped.  Her last poignant journal entry is an unrecognizable scrawl that trails off in mid-sentence, never to be resumed.  My mother died eleven years ago, and I still can't look at that last journal entry without weeping.

When I was a child, my parents' gift to most high school graduates who sent them an announcement was an Esterbrook desk fountain pen exactly like the one Mama used.  I was usually with her when she made her annual trip to the office supply in downtown Panama City, Florida, to purchase these gifts.  The pen base was formed in a rounded shape.  It was heavy and shiny black.  The pen was black except for the end opposite the writing nib.  This end was tapered to a point and made of clear plastic.  It looked like crystal, or so I thought at the time.

An Esterbrook desk pen symbolized adulthood to me.  I understood perfectly that children did not use fountain pens.  My mother firmly believed that one person should not use another person's fountain pen.  She thought that in time, a fountain pen adjusts itself to the angle at which the writer holds it.  A different writer, holding the pen at a different angle, might spoil the pen for its owner.  Mama thought it was bad manners to ask to borrow someone's fountain pen.

Mama's desk pen always held Sheaffer's "Peacock Blue" ink.  It was her trademark.  It's a turquoise blue, or maybe "aqua" describes it better.  It may have reminded Mama of the gorgeous aqua color of the Gulf of Mexico - an appropriate ink color for the many letters dispatched from Panama City to relatives in the mountains of West Virginia.

By the time I was a teenager, the annual pilgrimages to the office supply had stopped.  I didn't think much about it at the time.  Like most teenagers, my attention was focused on my own affairs, and I had ceased to accompany my mother on her errands.  I have learned since that Esterbrook stopped making fountain pens sometime during the 1950s.  And that, of course, explains why I did not receive an Esterbrook desk pen when I graduated from high school in 1964.