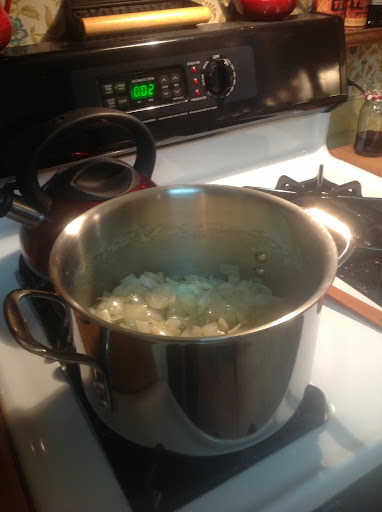 Today is another gray day. So far, 2013 has been rainy and cloudy, occasionally punctuated by a much appreciated sunny day. I'm fixing French Onion Soup - Rachael Ray's recipehere- for lunch. Gray days always call for soup, stew, or gumbo. Jerry cooked a delicious chicken-sausage gumbo out in the barn a few days ago when our kids and grandkids were here. We had enough left to put in the freezer. We'll bring it out on another gray day, but today it's onion soup. I don't have any Gruyere cheese, but I do have some Seaside Cheddar that ought to do just fine. I never met a cheese that I didn't like.
I ran errands in Baton Rouge yesterday and made my usual pilgrimage to Whole Foods for apples. If I'm going to eat an apple, it's got to be a good one - very crisp and sweet, but not too sweet. Lately I've been buying Honeycrisp apples - crisp, juicy, just right! The only down side is the blow to my wallet at the cash register. I noticed a bin of Kiku apples - a dollar a pound cheaper than Honeycrisps - and decided to buy just one to try. Apples have to audition and pass muster before I buy more than one. The lone Kiku passed with flying colors! They're a little smaller than Honeycrisps, but just as good.
Season Three of Downton Abbey ended on a depressing note which, of course, makes all Downton Abbey addicts eager for Season Four. But that is no doubt at least a year away. We Downton people have to cultivate patience. In the meantime, I plan to break out the Season One DVD on Sunday evenings and start the saga over.
Two of my favorites have combined - Jane Austen and postage stamps. The United Kingdom has issued six new postage stamps representing Miss Austen's novels. And did you know that you can order stamps directly from The Royal Mail onlinehere ? Very convenient for those in the US who like to collect British commorative stamps.
Posted by Judith B. Landry at 6:23 PM No comments:

I learned about Candlemas years ago from reading English novels, and everybody knows about Groundhog Day. But so help me, I never made the connection between the two until I read about it in Romancing the Ordinary by Sarah Ban Breathnach.

Candlemas dates back to the middle ages when candles were blessed at church and sent home with those who attended the Candlemas service. The candles symbolized the Divine Light. But as with most spiritual things, there was a very practical side. By the beginning of February, the household candle supply was waning and might need a boost to get to springtime when the daylight hours increased and candles were not in such high demand. Women were known to take a candle inventory before they headed off to church.

At some point the idea caught on - I have no idea how - that the weather on Candlemas was an indication of how long winter was going to last. An old English proverb goes like this:

If Candlemas Day be fair and bright,
Winter will have another flight.
If on Candlemas Day it be shower and rain,
Winter is gone and will not come again.

The Scots put it this way:

If Candlemas is bright and clear
There'll be two winters in the year.

What does all this have to do with groundhogs? I'm not sure what the official explanation is - or if there even is one, but it seems obvious to me what happened. Children, being inquisitive little characters, probably began to ask some legitimate questions. What if it's cloudy on Candlemas morning, but the sun comes out in the afternoon? What if the reverse is true? What if Candlemas is like a lot of other winter days where sun and clouds are intermittent all day? Parents were flummoxed as they often are when their children start with the questions.

Here's when the groundhog was called into service. Parents decided to deal with the pesky questions by saying that it all depended on whether or not the groundhog saw his shadow when he emerged from his burrow on Candlemas. Silly adults! They thought that would satisfy their curious offspring! But the children were perplexed as to how we would know the length of winter unless someone observed the groundhog seeing or not seeing his shadow. And this accounts for otherwise mature adults - some in very cold climates - bundling up on February 2nd to watch a groundhog emerge from a hole in the ground. Leave it to humans to go from the sublime to the ridiculous by linking an observance of the Divine Light to a groundhog. But it's all good fun, and I've no doubt that God holds groundhogs in high esteem since he created them.

I confess that I did not get up early for a rendezvous with a groundhog, but I'm looking out on a bright sunny day here in southern Louisiana. I won't be packing the winter jackets away just yet in spite of what Punxsutawney Phil did not see this morning up in Pennsylvania.

Posted by Judith B. Landry at 9:57 AM No comments: