I'm continuing to give the Ninja Cooker a work out since posting my last Ninja Notes here.  I've done three things in the Ninja on the "Oven" setting - beer bread, a flan (custard), and pork roast.

For beer bread I used the recipe found here.  The cooker's instruction book says that there's no need to preheat; but if I understand correctly, you should never use the cooker on the oven setting without having water in it.  The purpose of the Ninja's oven feature is to do "steam infused" baking or roasting.  I put four or five cups of water in the cooking vessel, placed the rack in the water, and the loaf pan with batter in it on the rack.   The water level was just below the pan - not touching it.


The Ninja's lid has a vent hole that measures almost three-eighths of an inch - pretty large for a vent hole.  An incredible amount of stem pours out of this hole when on the oven setting.  I admit it - I thought about plugging the hole, but my more responsible genes kicked in and I decided to read the instruction book - yet again.  Plugging the hole is a big no-no, and I think I see why.   If the vent hole was plugged, the water would probably boil right out of the pot and flow into the heating unit that the cooking vessel sits in which would probably ruin the Ninja, electrocute any by-standers, and burn the house down - maybe even the whole neighborhood.  Perhaps I'm exaggerating the possible outcome, but don't plug the hole! 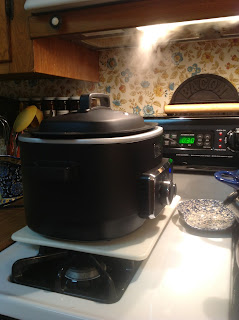 However, I'm using the Ninja almost daily, and all my kitchen counters have wall cabinets above them.  I don't like the idea of all that steam going up under the wall cabinets.  If I was building a new house, I'd design the kitchen so that there would be a few feet of free counter space with a vent fan over it just for the Ninja and all the other small electric appliances that put out steam and heat.  But the only vent fan I have is over the stove, so I put a cutting board on the stove burner grates and set the Ninja on it.  You can see all that steam going up to the vent exhaust fan.

I have to tell you that this is a no-no, too, according to the instruction book.  It says not to put your Ninja anywhere near the stove or anything that is hot.  Ok, I get what they're talking about.  But my stove is not hot when I put the Ninja on it.  I won't try to use the stove and the Ninja at the same time.  Of course, this might not be a good idea if you have children or loony adults at your house who might come along and turn the stove on while the Ninja is in residence.  And it's really a no-no if you have an old gas stove with pilot lights.  But since we don't have children or pilot lights and neither Jerry or I are loony - yet, I think it's ok.

﻿﻿﻿﻿﻿﻿
﻿﻿﻿﻿﻿
Now, back to the beer bread - after baking for an hour, the beer bread was done, but not brown at all - not very appetizing as you can see in the picture.  As far as I am concerned, bread that is sickly pale just will not do!  I put it in my regular gas oven  under the broiler - after moving the Ninja off the stove, of course. I kept a vigil because usually bread will burn after two or three minutes under the broiler.  It took seven minutes to get this bread to brown!

By now you might be wondering how the bread turned out.  I've baked beer bread in the regular gas oven before, and Ninja "steam infused" beer bread is - well, different.  On the positive side, the texture is very fine.  Once the bread cools you can get nice slices that don't crumble.  Beer bread baked in a regular gas (or electric) oven has a coarse texture and tends to be a little bit crumbly when sliced.  But the regular oven produces much better tasting beer bread.  The Ninja bread didn't taste bad, it was just sort of blah.  I just don't think infusing steam into bread is a good idea - it makes a fine textured, heavy, relatively tasteless bread.

The beer bread may have been disappointing, but the flan and the pork roast were big successes.  But this post is already too long, so I'll save them for the next Ninja Notes.

Posted by Judith B. Landry at 5:56 PM No comments:

Labels: From the Kitchen, Reviews 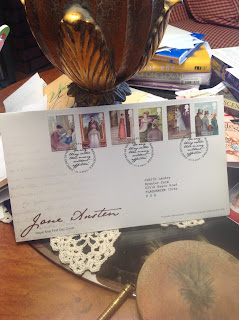 It's cloudy and 80 degrees.  I'm looking out on our maple tree.  It has clothed itself with fresh new leaves.  Even the pecans trees are putting out new foliage, so spring is here in earnest.

I've written a post card to a new Fountain Pen Network friend.  She lives in Ynys Mon, Wales - the Isle of Anglesey.  I've been "visiting" there via the internet.  It's an intriguing place!

I've had to turn the TV off.  It's so frustrating to hear about all the suffering brought on by the bombings in Boston and know that you are helpless to do anything about it.  Pray.  That's all I can do.  Pray for all those who are injured and the families of those who have died.  It's heartbreaking.

I'm off my housekeeping schedule.  The laundry should have been done Monday, but I'm doing today.  While the new washer is making all its strange sounds, I'm upstairs - in the Far Corner - my refuge from the activity of downstairs.

But now it's time for me to go back downstairs and check on the corned beef brisket that simmering on the stove - and get butternut squash ready to go in the Ninja Cooker.  More later . . .
Posted by Judith B. Landry at 11:42 AM No comments: 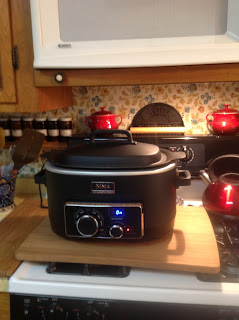 Is there no end to small kitchen appliances?  No, apparently not.  Jerry and I both are fascinated by them.   I have to confess that we've been known to buy these gizmos and not use them much after the new wears off.  When was the last time we used the Showtime Rotisserie?  Don't ask.

Jerry has been interested in the Ninja Cooker for a while now.  I did everything I could to discourage him, thinking that it was pretty much like the two slow cookers we've already got.  And I figured if it wasn't like them, surely it was a clone to the three West Bend cookers that I've had for at least 25 years.  (One of these West Bend cookers was inherited from my mother.)  I like the West Bends and use them fairly often.

So I asked myself - Why do we need a Ninja Cooker?  At $159.00, it's got to be more than a cool-looking appliance with a cool-sounding name.  What does it do?  After doing some internet research, I found that it really is a different animal from the other appliances in our kitchen collection.

I read the fine print on my 20% off Bed, Bath & Beyond coupon and saw that Ninja Cookers were not listed in the exclusions.  So off I went to Baton Rouge.  I came home with a Ninja Cooker from BB&B and a nice little enameled cast iron Dutch oven from Walmart - but that's another story.  When I went to bed that night, the Ninja was unpacked, washed, and ready to go the next morning.

What sets the Ninja apart from our other appliances is that it has both Stovetop and Slow Cooker settings.  The Stovetop settings (high, medium, and low) make it like cooking on top of the stove.  It gets hot enough to brown meat or sauté vegetables.  The Slow Cooker settings (high and low) turn it into a slow cooker.  There is also a Buffet setting which keeps food warm after it's done.  And if all this is not enough, there's an Oven setting - more about that later.

I had not been grocery shopping for ingredients to make one of the recipes in the little book that comes with the Ninja.  Besides, I wanted to see if I could fix my old favorite recipes in this critter.  It was 8:00 a.m. when I got out a frozen block of ground meat and put it in the Ninja on the low Stovetop setting.  About thirty-five minutes later, the meat was completely defrosted.

I could have probably defrosted this meat in a skillet on top of the stove in fifteen or twenty minutes, but I would have had to stand over it, scrapping layers of meat off as it defrosted, and watching to be sure it didn't burn.  In the thirty-five minutes that the Ninja took to do this job I made the beds, straightened up my bathroom, and did a few other chores.

I turned the Ninja to the Stovetop high setting and browned the ground beef - it sizzled, just like on top of the stove.  Then I added chopped onion and bell pepper, turned it to Stovetop medium, and let that cook a few more minutes.  The plan was to continue on and make my homemade spaghetti sauce.

But about that time, it came to my attention that the CPA needed a piece of paperwork from us before he could file our taxes.  Since this was the Friday before taxes were due, I had to race off to Baton Rouge to deliver the needed document.

I started to turn the Ninja off and forget about cooking until I got back, but then I remembered it's a slow cooker as well as a stovetop.  I gave up on my homemade sauce recipe since I knew it would be lunch time by the time I got back home.  I dumped a jar of ready-to-use spaghetti sauce in with the ground beef and vegetables, stirred, turned the Ninja to Slow Cooker high, put the lid on and headed for Baton Rouge.

When I got home two hours later, the sauce was perfect!  I think I'm going to like the Ninja.  It takes interruptions in stride, and interruptions are all too common around this place.  Cleaning the non-stick, lightweight cooking pot was quick and easy.  There's more to tell about the Ninja.  Stay tuned.
Posted by Judith B. Landry at 5:31 PM 4 comments: