The Couch That Came and Went 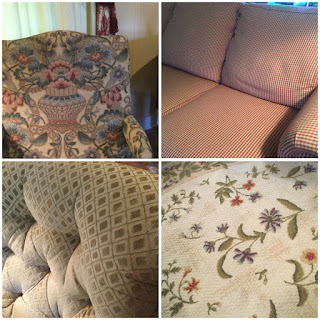 The new couch and I had a quick wedding and an immediate annulment.  The trouble started when the delivery fellows told me they couldn’t take the old couch.  They didn’t know why the sales people at the store told they could.  The best they could do was haul the old couch to the road - heedless of the severe weather that was expected in an hour or two.  I felt like the old couch had entirely too much life left in it for such a fate.  I told them to push it halfway into the kitchen, and we’d figure out what to do with it later.  But I wondered what that would be.  We had already tried to give it away with no success.  How long was the living room going to look like a warehouse with us sidling between couches?

When the movers assessed the situation, they discovered that they’d have to take the front door off its hinges to get the new couch in.  This had not been necessary when the old couch arrived in 2009, but the new couch’s back is slightly higher than the old one. At length the new couch made it’s entrance, having to be lifted up over the stair bannisters.  These movers are young 20-somethings, but still - how do they spend eight hours a day moving big pieces of furniture in and out of houses?

The straw that broke the camel’s back was when the new couch finally made it to the living room, and I was shocked to find that the seat cushions did not have upholstery fabric on the bottom - just some nondescript cheap, brown, muslin-looking stuff.  It wasn’t an outrageously expensive couch, but I thought the price warranted better than that.

I pointed out to the 20-somethings that this wouldn’t do because the cushions can never be flipped over.  They assured me that the couch had been Scotch-guarded, and I didn’t have to worry about stains.  Poor innocent babes!  They think it’s all about stains!  I pointed out - trying desperately to keep my sweet disposition - that for couch cushions to keep their shape, they must be flipped periodically.  I told them as gently as I knew how that I couldn’t keep the couch, but that I wasn’t going to quibble about having to pay the delivery fee.

They went outside and conferred - and probably did a fair amount of venting about the shrew who lived inside.  I don’t even blame them if they did.  When they came back in, they said I’d have to pay the delivery fee and an extra $15 for taking the door down and putting it back up.  I agreed.  They said I could settle things up later at the furniture store. They lifted the new couch back over the stair bannister, loaded it in the truck, put the old couch back in place, and were probably glad to see the last of me.

I went to the store today and talked to the store owner who we’ve known for years.  He borders on being a saint.  I told him my complaint about the cushions.  He understood, but said putting a cheaper fabric on the bottom of the cushions is pretty standard practice these days unless you pay the price of a small car for a couch.  I told him I’m not quite ready to buy a small car.  He laughed and refunded everything, but the delivery fee.  He refused to let me pay him for the door being taken down.  I’m thinking of giving the 20-somethings a gift card for a meal at a local restaurant.

The only thing that’s wrong with the old red gingham couch is that one of the back cushions has come un-sewed from the back.  I’ve watched a couple of Youtube videos that show how to fix this with a curved needle and some upholstery thread.  I already have curved needles in two or three sizes.  I went to the fabric store today.  There was nothing there called upholstery thread, but they had button & craft thread which looks pretty heavy to me.  The repair attempt will begin as soon as I can get to it. Stay tuned.

The living room seems to have fallen into the quintessential English Country look with the antique side chairs, the old gingham couch, the gold recliner, and the flowered rug - all different patterns, vying for attention.  It’s a look that you either love or hate.  I love it, and since I live here, I guess it will do.

Posted by Judith B. Landry at 5:33 PM No comments: