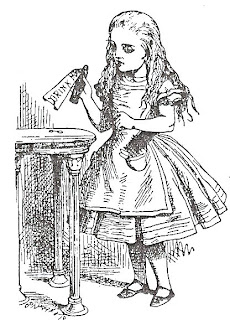 I saw the movie, Alice in Wonderland, yesterday. I'm glad I read the book last week. The book is full of light, humor, and nonsense. Yes, it's true that the Queen of Hearts is often getting annoyed with people and shouting "Off with her head!" or "Off with his head!" But in the book, the Queen's executioners never get around to carrying out her orders. And the Queen is either forgetful or forgiving because - when she encounters someone whose head she recently threatened to lop off - she doesn't seem to remember her sentence or care that the person still has his or her head. At any rate, the book is full of funny silliness and defies being taken seriously.

In the book, Alice is an endearing child.  In the movie, she comes off as a teenager with an attitude.  I have to give the movie maker a thumbs up for the White Rabbit though.  He was very much the White Rabbit of the book.

Compared to the light wholesome airiness of the book, I thought the movie was dark, ominous, and too serious.  I must confess - I was glad when it was over.   Now maybe I'll read Through the Looking Glass, Lewis Carroll's sequel to Alice in Wonderland. I understand that it is a darker tale than Alice in Wonderland. Maybe it was the real inspiration for the movie.
Posted by Judith B. Landry at 3:27 PM

Well, I never have liked dark, ominous movies, so maybe I'll have to fall down the rabbit hole in the pages of the book. I'm glad to know the picture of the White Rabbit was on target, though, because he was quite handsome. :-)