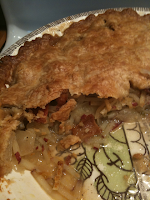 I have quite a few English ancestors.  So why didn't any of the traditional English recipes get handed down in our family?  We never had Yorkshire pudding, shepherd's pie, plum pudding, or fidget pie when I was growing up.  French cooking may be applauded by the whole world, but English cooking is often spoken of in less than glowing terms.  Could it be that my English ancestors came to America to escape English cooking - in spite of what the history books say about their wanting to escape religious persecution?  I don't know, but a few years ago I decided to try out some of the traditional English recipes.

I bought a special pan to make plum pudding - which is a cake, not what we Americans think of as pudding.  To add to the confusion, there are no plums in plum pudding.  English recipes often have names that are not very descriptive.  Maybe it's the English sense of humor.  Anyway, plum pudding is steamed on top of the stove and takes several days to complete from the initial mixing of the batter to the steaming.  I like it, but it's not my all-time favorite dessert.

I've made Yorkshire pudding which is a flour/eggs/milk batter, poured into hot drippings from a roast, and baked in the oven.  Delicious!  I've never made shepherd's pie, but I've had it on two or three occasions at Scottich Highland Game festivals.  It has ranged from OK to pretty good.  Maybe I should bake my own and see if it's any better.

Fidget pie has always been a complete mystery to me.  The origin of the name seems to be lost in the mists of antiquity.  Some think its name may come from the word "fitchett," a slang word for apple, but who really knows?   I googled Fidget Pie recently and found a recipe here www.uktv.co.uk/food/recipe/aid/574117.  I used a thawed frozen pie shell for the top crust.  Here's the filling recipe:

3 potatoes, peeled & finely sliced (I didn't peel my red potatoes; and instead of slicing them, I used my mandolin slicer with the julienne attachment.)

2 onions, sliced (I chopped mine.)

2 slices sweetcure gammon (Gammon is English for bacon, I think.  Anyway, that's what I used - a good lean breakfast bacon.  And I used about six slices.  I like bacon.)

150ml (about 1/2 cup) vegetable stock (I think chicken or beef stock would be just as good.  Another Fidget Pie recipe called for apple cider instead of vegetable stock.)

I assembled all this as follows:
(Preheat oven to 350 degrees)  I melted the butter over low heat in a large skillet with straight sides.  I added the potatoes, onions,  apples, and sage; stirring until whatever liquid produced was almost evaporated and everything was partially tender.  I put this mixture in a large, greased pie plate.  I stacked my six slices of bacon and cut them into small pieces.  I put them into the same skillet, separating the pieces, and stirring until brown.  I spread the bacon pieces over the potato/apple/onion mixture in the pie plate.  Then I poured the vegetable stock in and sprinkled the whole mixture with salt and pepper.  I flattened the thawed pastry shell and put it on top of the mixture, pressing the edges down on the pie plate.  I brushed the crust with milk and baked the pie at 350 for 30 minutes.  I reduced the oven temperature to 325 and baked for another 10 minutes until crust was golden brown.

Jerry and I both agree that this recipe is a keeper!  It's different and delicious!  Jerry confessed that he did quite a bit of "fidgeting" while I was preparing this pie - wondering what he was going to be expected to eat.  Jerry's a Cajun.  I think he's suspicious of anything that's not jambalaya, seafood, or a roux-based stew.