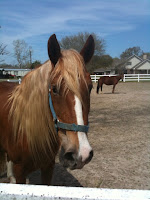 I had a rough weekend.  I've just now recovered enough to write about it.  We missed our Saturday evening feed and our Sunday morning feed.  And - to add insult to injury - we had to spend the night in the triangle pasture.  We've been in the triangle for daytime grazing many times, but this was the first time we ever spent the night over there.  I don't like the triangle at night.  That wooded fence line gives me the creeps.  Anything could be lurking there, just waiting to spring on you - a lion, a tiger, or - more likely, since this is Louisiana - a slimy alligator.

All this trouble and hardship started because of the improvements they're doing on the barn.  Here's a news flash for you - barns are for the convenience of people, not horses.  The people around here didn't like it that it gets muddy in front of the stall doors when it rains.  They can't stand getting mud on their feet.  Of course, mud never bothered any self-respecting horse, but people are persnickety.  So they decided to add on to the overhang above the stall doors.  This involved a lot of beating and banging, welding, setting up scaffolding, moving material in and out of the gates.  They figured we would be in the way in the barn pasture so they decided to lead us over to the triangle.

So anyway - Saint Tesoro was already in the triangle when they got me and Fay out of our stalls.  I don't remember exactly why or how things got rowdy, but it was Fay's fault.  She was all nervous and started dancing around and going in circles.  And any time Fay gets nervous, I do, too.  I mean - if she's nervous, there must be a reason.  And if there's a reason, shouldn't I get nervous, too?  Then too, it was cool and crisp and we felt kind of frisky.  So we danced and circled all the way across the back yard.  Our people don't like that kind of behavior.  I don't know why it bothers them so much.  It's not like we're trying to run away from them.  But they don't like it.

We enjoyed grazing all day Saturday in the triangle.  When it was time to go back to the barn in the evening for supper, we all waited at the gate - like we always do.  But nobody came to lead us back to the barn.  Just before dark, they came on the tractor with the bucket loaded with hay.  Jerry threw the bales of hay over the fence for us to eat.  He and Judy talked about how rowdy we had been that morning and said they had decided to let us spend the night in the triangle so they wouldn't have to lead us back the next morning.

I couldn't believe my ears!  Hay is OK, grass is better, but feed is out-of-this-world good!  And soon as they said we were spending the night in the triangle, I knew there wasn't going to be any feed.

It was a miserable night.  Tesoro read me the riot act.  He said he was having to miss his feed because I misbehaved.  I tried to tell him it was all Fay's fault, but he wouldn't listen.  He has a crush on Fay and doesn't think she can ever do anything wrong.  And Fay's lips were sealed.  She wouldn't say a word in my defense.  So I had a pretty rough night what with Tesoro fussing at me and the scary shadows and sounds coming from the fence line.  I sure was glad to see the sun rise Sunday morning.

Well, the overhang extension is all done now except for a few finishing touches.  We're back in the barn pasture - getting our morning and evening feed.  And to think - all that hoopla just to keep people from getting their dainty little feet muddy!
Posted by Judith B. Landry at 12:14 PM

Po ole Rocky- he is in need of real understanding. Fay is such a fickle diva, Tesoro is such a sterling example of that "perfect" ideal of Grand Horse of the Barnyard and Pasture...Rocky is just plain ole "I Am Who I Am, Deal with it"...He must be the first horse to ever really need to stamp his foot and snort!!! How about getting him a new horsey for a friend. There always needs to be an even number to create balance.. Hmm....