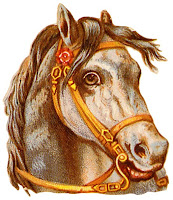 I haven't forgotten about the Wise Men. They're on their long arduous journey from the far reaches of Parthia to Jerusalem. Meanwhile my research is ongoing, and there will be at least one or two more posts about the Magi before Epiphany - January 6.

Today has been a bleak winter day - and it's not even officially winter yet. The temperature was about 53 degrees this morning and fell steadily all day. This morning I was able to get in some barn time. Time in the barn is therapeutic for me. My life - like everybody else's - is filled with modern appliances, gadgets, computers, etc. These things were unheard of a hundred years ago. But grooming horses, cleaning stalls, and filling hay racks has been going on "since time out of mind," as my grandmother used to say. These kinds of activities serve as a balance to our fast-paced, high tech world.

There was a little biting wind coming out of the north, across the bayou this morning so the big doors on either end of the barn aisle had to stay closed. We usually keep nylon halters on the horses, but we've let them go halterless in the pasture for about two weeks. I thought they might take a dim view of their halters, but all three of them lowered their heads and stood perfectly still while I buckled their halters on.

I tethered them in the aisle, one at a time, next to a rack of hay so they could munch while I groomed them. They're putting on their thick, long winter hair. In the summer they're sleek like satin, but in the winter their coats look like velvet. Grooming horses is satisfying because they don't just tolerate it like a dog or cat does, they seem to enjoy it.

Rocky's long luxurious mane was a tangled mess. A mixture of water and Avon's Skin-So-Soft bath oil makes a good detangler and smells good, too. I sprayed some in Rocky's mane and it didn't take long to get the tangles out.

If the weather is nice and the big doors are open, Fay likes to move around while she's being groomed so she can see what's going on outside. She a nosey little mare. Since the doors were closed today, she wasn't as antsy as she usually is.

Tesoro loves to be brushed between his eyes and under his forelock. He moves his head up and down as I move the brush up and down. He thinks he's helping.

We've had two or three hard freezes this month - unusual for December in Louisiana. Our hard freezes - if we get any at all - usually come in January or February. The grass in the pasture is already brown so we're feeding a lot of hay.

There's no green at all left in the sugar cane fields that were planted in the summer. The freezes have turned everything brown - except for patches of some kind of clover that dot the landscape here and there.

In our mild climate the worst part of winter to me is not so much the cold, it's the bleak brown landscape. They say it's doubtful that Christ was born in December, but I'm glad that's when we celebrate his birth. Winter would be almost too bleak to bear without the cheerfulness of Christmas.
Posted by Judith B. Landry at 9:12 PM

Labels: News from the Barn

Nice post, love the topic. We do have same interest. Love horse so much. Keep it up buddy.