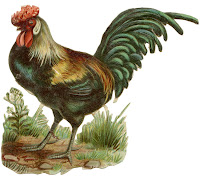 Once upon a time on Jefferson Highway in Baton Rouge there was a little restaurant in the same building with La Rouge Market.  In fact, you entered the restaurant through the market.  It was a pizza place, but they also served soups and sandwiches.


The man who ran the restaurant was Greek.  I don't remember his name, but it was a Greek name.  He had a Greek face, and English was obviously his second language.  One of his employees took orders at the counter and the Greek man brought the food out when it was ready.   The kitchen was visible through a pass-through behind the counter, and I could see that it was the Greek man doing the cooking.
La Rouge Market has gas pumps, and one cold winter day I stopped there for gas.  It was lunch time, and I thought this place was probably as good as any other for a quick, lonely lunch.  I was hoping something hot would chase the chill from my bones.  I ordered chicken soup and after the first taste, I was hooked on it.  It was the best chicken soup I had ever tasted.  I like my own homemade chicken soup, but there was something different about this soup - some herb or spice that was unfamiliar to me.  But it was delicious!  It had the usual ingredients - chicken, carrots, celery, onion, etc.  It looked just like my homemade soup, but it tasted so much better.
From then on, when I made my weekly trips to Baton Rouge, I had the Greek man's chicken soup for lunch.  I discovered that there was a drive-through window, so I put the restaurant's phone number in my contacts.  Sometimes I called ahead, ordered my soup, picked it up at the window, and sat in the car to eat.  I don't think there is anything much lonelier than eating in a restaurant by yourself.
For at least two or three years I enjoyed the Greek man's chicken soup for lunch.  It was a hectic time in my life, and there was something emotionally comforting about that chicken soup.  It was good for the soul as well as the body.
Then the fateful day came.  I called to place my order for chicken soup and got a recording saying the number had been disconnected.  I didn't believe it.  It had to be a mistake, so I continued on my way to the Greek man's restaurant.  To my horror, it was closed - and not just closed for the day.  I could see through the window that the tables were gone, and the walls were being repainted.  There was a sign in the window:  "Popeyes Coming Soon."  Popeyes coming soon?!  "The devil take Popeyes!" I thought, "I need my chicken soup!"
I think of the Greek man often.  I even dreamed about him once.  I was walking on a sidewalk with a lot of other people.  I recognized the Greek man among the sea of people walking ahead of me.  I couldn't call to him because I had completely forgotten his name.  I pushed and plowed my way through the crowd, trying desperately to catch up with him and get him to tell me the secret ingredient in his chicken soup.  But alas!  He disappeared in the crowd, and I still don't know the secret ingredient.
I guess I'm thinking of the Greek man today because I'm suffering with a terrible head cold, it's a chilly day, and the Greek man's soup would be so comforting!  I wish him well, wherever he is.  And I'm sorry I never told him how good his soup was.
Posted by Judith B. Landry at 3:13 PM

Was it Avgolemono (Greek Lemon Chicken Soup?)? I had a Greek co-worker many years ago who would bring that soup to share & it was the best. It's now my favorite chicken soup but making it from scratch is lots of work. There are versions online that call for chicken broth and no chicken or veggies that are quick & easy though.

Thanks, Jan-a Banana - I was hoping someone might share some knowledge about Greek chicken soup. I'll google Avgolemono and check out the recipes. I've tried googling "Greek chicken soup," and got recipes that call for eggs in the soup - definitely not what I was getting from the Greek fellow.

Ah, well then his may have been something else because Avgolemono has eggs & lemon in it (& is a bit thicker than regular chicken soup. For awhile we had a Daphne's Greek restaurant in our town & I'd go buy their soup whenever we had colds. :)