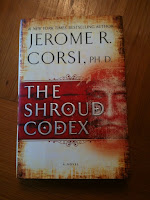 I just finished Jerome Corsi's novel, The Shroud Codex, about the Shroud of Turin - that fascinating relic that has been the subject of controversy for years and will probably continue to be that for many years to come.  It's the author's first venture into the world of fiction after becoming a best selling author of non-fiction.  I'm half inclined to wish he had written a non-fiction book about the Shroud of Turin. As a novel, Corsi's book leaves something to be desired.  The dialogue seems contrived and unnatural.  But maybe that's just me.

On the positive side - there's a wealth of scientific information in Corsi's novel about the Shroud of Turin. The characters in The Shroud Codex spend most of their time in meetings, discussing the Shroud.  If you join them, you'll learn a lot.  If you think the status of the Shroud was settled a decade or so ago when the carbon-14 tests indicated that it was from the medieval period and thus could not have been the burial shroud of Jesus Christ - think again.  It is now known that the carbon-14 tests were done on a portion of the Shroud that was repaired in the medieval period and not on a portion of the original Shroud.

No matter what your opinion of the Shroud is, you'll find a kindred spirit among the novel's characters. They include atheists who think the Shroud is a hoax, religious people who are convinced it's the burial cloth of Christ, and others who can't make up their minds.  The characters' quest to find the truth about the Shroud takes them from New York City, to Rome and Turin, Italy - and to CERN, the European laboratory of particle physics in Geneva, Switzerland.

My favorite character is Pope John-Paul Peter I - a ficticious pope who succeeds the present Pope Benedict XVI.   He maneuvers with finesse and good sense among characters of widely differing opinions.

If you have even a passing interest in the Shroud of Turin, you will enjoy The Shroud Codex.
Posted by Judith B. Landry at 4:33 PM